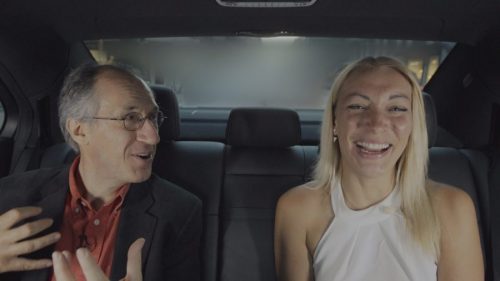 Into the Night with Gérard Biard and Inna Shevchenko in Paris

Gérard Biard, editor-in-chief of the satirical magazine “Charlie Hebdo” and the Ukrainian feminist leader Inna Shevchenko, spend a common evening under tight security and police protection in Paris, discussing religious criticism, blasphemy and feminism.
Biard has been working for the satire magazine since 1992 and wants to continue circulating socio-political caricatures even after the 7.1.2015 terrorist attack on Charlie Hebdo, in which 12 people were killed,. Biard is one of the most ardent representatives of secularization and founder of the men’s organization Zéromacho, which fights against prostitution and for gender equality. Biard has received numerous awards, including the “PEN/Toni and James C. Goodale Freedom of Expression Courage Award” for his political and social commitment. He has also received numerous death threats since the attack on the satirical magazine Charlie Hebdo, and has since been regarded as the most imperiled man in France. But instead of being intimidated, he lets all the fanatics who want to impose a new religious totalitarianism on France and the rest of the world know, “We shit on you!”

The Ukrainian activist Inna Shevchenko joined the FEMEN association — whose new, radical form of the women’s protests has repeatedly attracted the attention of the world press – after participating in the “Orange Revolution” in the Ukraine in 2004. Shevchenko is permanently exposed to danger through her political commitment and passionate activism. She was beaten up by the Blearussian Secret Service in 2011 after a protest in Minsk, and was almost shot during a panel discussion in Copenhagen last year. She was given political asylum in France three years ago. Since then, she has lived in Paris and is head of the French FEMEN organization.

Shevchenko, who has lately been a strongly vocal opponent of the oppression of women in all religious systems and thus has time and again been threatened by Muslim fundamentalists, meets Gérard Biard in a small café in the middle of the Parisian nightlife district, in which Islamists indiscriminately shot people last November. The last time the two had met was that the funeral of of Stéphane Charbonnier, the former editor of Charlie Hebdo.
In a heavily guarded café, which remains closed to the public during the shoot, the two are pleased about a new French law that criminalizes clients of prostitutes. Speaking with Rabbi Delphine Horvilleur, they discuss religious criticism, and how one can fight against Fundamentalist thinking in these difficult times, not only in France, but worldwide. Rabbi Horvilleur pleads for a reinterpretation of the sacred writings of all monotheistic religions, since in her opinion, the oppression of women in Islam, Christianity and Judaism is only a reflection of patriarchal power systems that deliberately ignore the feminine roots of religions.
Gérard Biard is the first man to be allowed to visit FEMEN women in their training rooms, which are connected to the feminist bookshop “Espace des Femmes”. Shevchenko leads him through the premises and introduces him to some of the activists. They are making FEMEN logos, the so-called “boobs prints”, for which they leave color imprints on canvases with their breasts, and which they sell to their supporters. In the “Espace des Femmes” they meet Elisabeth Nicoli and Michéle Idels, feminists from the beginning of the French women’s movement MLF, and who have recognized the Femen women as their legitimate granddaughters. Together with the Iranian exile author and sociologist Chahla Chafiq, they discuss the absurdity of a so-called Muslim feminism, a contradiction in itself.

In the restaurant Le Pharamond , Schevchenko and Biard dine in a Chambre Separée for security reasons, and philosophize about the necessity of blasphemy and the political dimension of Islam, which leaves especially the political left in fear of falling into the trap of alleged tolerance. Both are concerned about the fact that Biard is described by some left-wing critics as a racist, although Charlie Hebdo had ascribed to tolerance and freedom of expression since the beginning. Together, they remember Stéphane Charbonnier, called “Charb,” the former editor of Charlie Hebdo, who had been killed by the Islamists, who was a great admirer of Arab culture: “They don’t know who killed them!”
For just like them, Charbonnier only mocked the Islamists and not Islam.